Mahakaleshwar Jyotirlinga Temple is the most famous temple of Lord Shiva in Madhya Pradesh and is one of the twelve Jyotirlinga, the sacred abodes of Shiva. The Mahakaleshwar temple is situated on the side of the Rudra Sagar lake and the idol of Mahakaleshwar is known to be dakshinamurti.

The ‘Temple City’, Ujjain, is thronged largely by the Hindu devotees. As the name given to it suggests, the city is dotted with number of big and small, old and new temples making it an important religious place in India to visit. However, Ujjain is not only for the Hindu devotees, there are few places in the city that marks it as a historic city as well. Situated on the bank of River Shipra, Ujjain is also the venue for the famed Kumbh Mela. Therefore, one cannot miss out on this lovely city that ever ready to shower blessings and make you walk back in time.

It is the fifth largest city in Madhya Pradesh by population and is the administrative centre of Ujjain district and Ujjain division. It is a famous Hindu pilgrimage centre with the Kumbh Mela held here every 12 years. The famous temple of Mahakaleshwar Jyotirlinga is also located in this city. 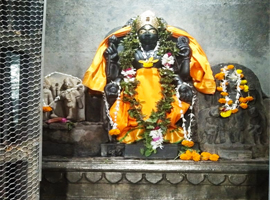